Surgeons: At the Edge of Life

Series three of 'Surgeons: At the Edge of Life' was filmed at Royal Papworth Hospital and Cambridge University Hospitals on the Cambridge Biomedical Campus at the end of 2019 and start of 2020. It was broadcast on BBC Two in October.

The highly acclaimed series 'Surgeons: At the Edge of Life' was broadcast on BBC Two in October, revealing the extraordinary and pioneering work of some of the country's top surgical teams.

In the UK, three million major operations are carried out every year - some of the most difficult ones are performed here at Royal Papworth Hospital.

The documentary shows four operations that took place at Royal Papworth, including a pulmonary endarterectomy (PEA), an 18-hour chest wall reconstruction, a double lung transplant and surgery on the aorta.

Footage was shot from fixed rigs within operating theatres in order not to distract the operating teams. Shots include close-ups of surgeons, anaesthetists and other members of the teams at work during critical moments of some of the most advanced and complex surgery carried out anywhere in the world.

Royal Papworth Hospital is the UK’s leading heart and lung hospital, treating around 50,000 patients each year. We carry out more major heart operations and more heart, lung and heart-lung transplants than any other UK centre. We are the only centre in the country for a range of specialist services including PEA surgery and Balloon Pulmonary Angioplasty (BPA).

Our new, purpose-built hospital is located on the Cambridge Biomedical Campus next to Cambridge University Hospitals NHS Foundation Trust, which runs Addenbrooke's Hospital, which also features in the series. Each episode will show one operation from Royal Papworth and one from Addenbrooke's.

The series was filmed at the end of 2019 and start of 2020 by Dragonfly Film and Television.

Catch up with the series on BBC iPlayer

Read the full press release announcing series three of Surgeons: At the Edge of Life.

In the first episode, Mr David Jenkins, Divisional Director for Surgery and Transplant, performs one of surgery’s most technically demanding – and extraordinary - operations.

Called a pulmonary endarterectomy (PEA), no other hospital in the UK offers this procedure and it will take Mr Jenkins' patient, 54-year-old grandmother Shelly, to the very edge of life.

Shelly has a form of hypertension where her body is unable to dissolve blood clots which have travelled to her lungs and are now blocking her pulmonary arteries. More and more clots are building up and without the operation she will die. The only way to remove them is to cool her body to just 20 degrees, stop her heart and drain all the blood from her body. She will be technically dead on the theatre table. Mr Jenkins admits that it does seem “counterintuitive” to make Shelly temporarily dead. “Is she between life and death? It is that in-between place”.

Mr Jenkins has just 20 minutes whilst Shelly is entirely empty of blood to remove the clots, so he needs to be fast. The cold will protect her during this time because the low temperature slows her cell function, but any longer and the lack of oxygen will damage her brain. Shelly will then need to be refilled with blood before Mr Jenkins repeats the whole process again on her other lung. 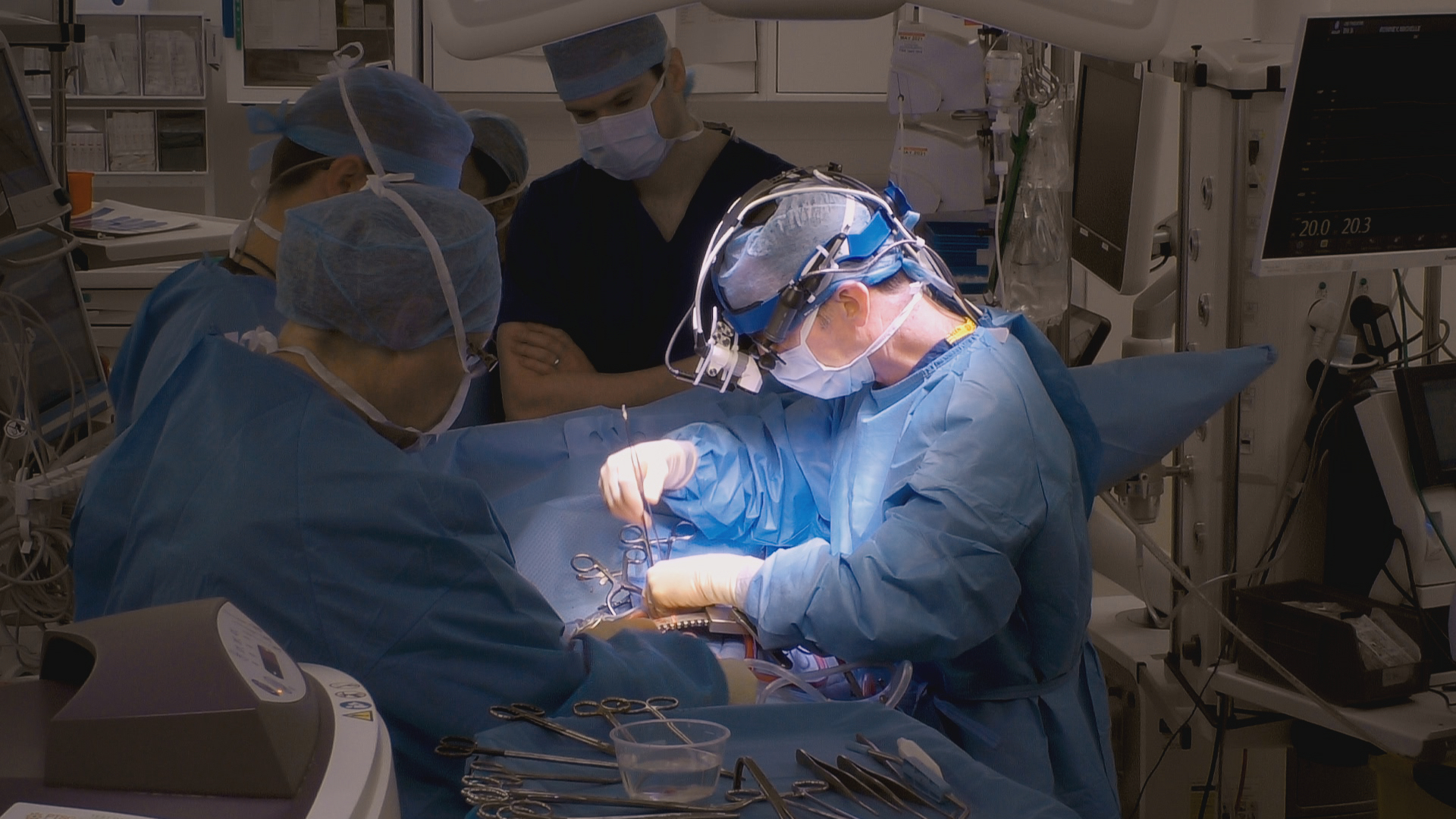 Read more about the operation and Shelly from episode 1 (no spoilers).

Catch up with episode one on BBC iPlayer

At Royal Papworth, senior consultant thoracic surgeon, Aman Coonar, calls on the skills of Addenbrooke’s plastic surgeon, Charles Malata, to help him undertake a chest wall reconstruction; a complex procedure that is scheduled to last at least 12 hours.

Our patient is former builder, 59-year-old Kevin from Peterborough, who has been suffering for 17 years since having a cancerous lung removed. The cancer was cured but the cavity left in his chest has never healed and Kevin has had to live with an open hole in his back, so that pus and air can drain out of the chest cavity. The constant flow of fluid means Kevin has to change a dressing several times a day, making it impossible to lead a normal life and leaving him miserable. 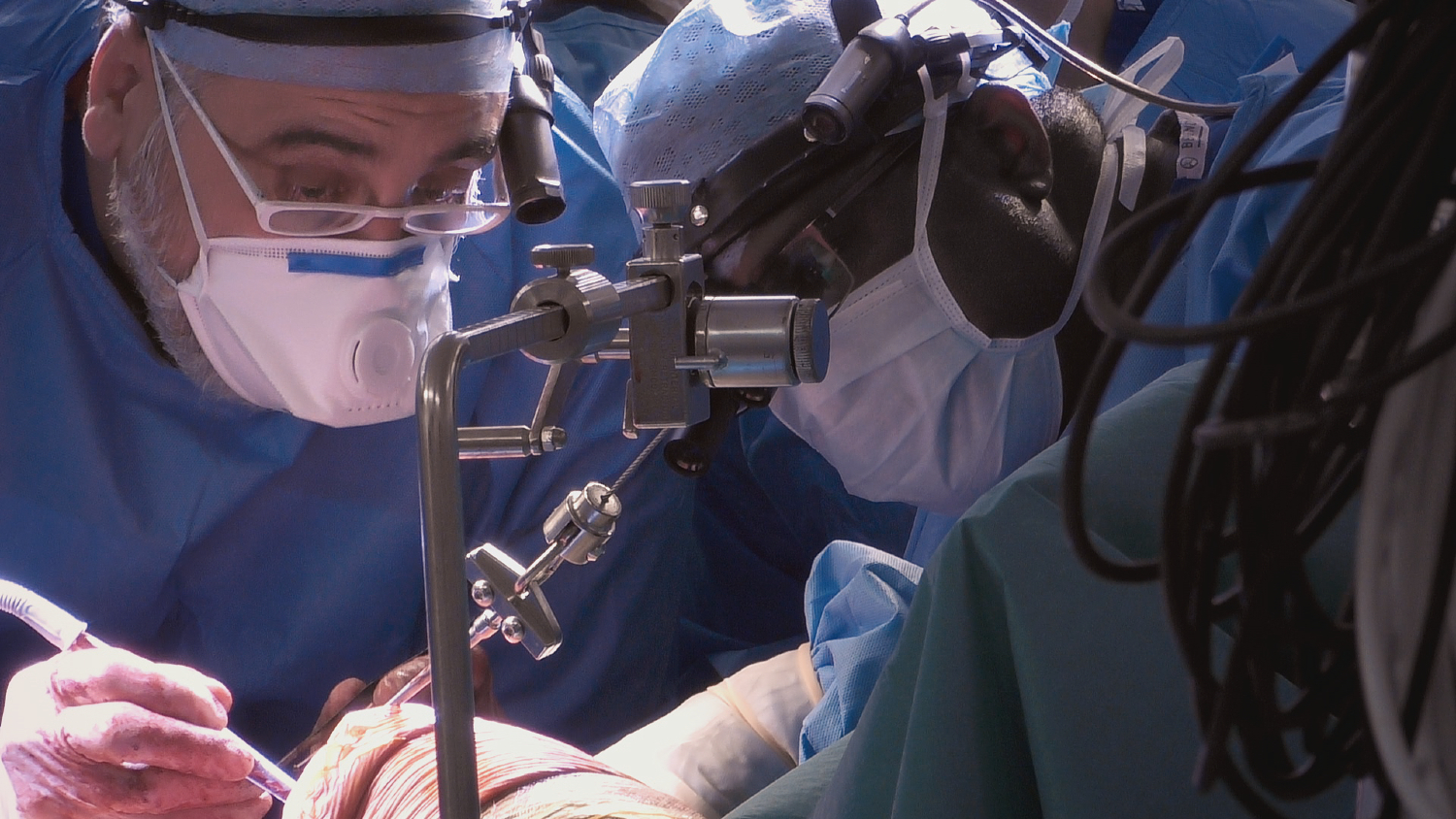 Read more about the operation and Kevin from episode 2

Catch up with episode 2 on BBC iPlayer

In the third episode of this critically acclaimed series, transplant surgeons Marius Berman and Pedro Catarino take on one of the most difficult transplant procedures at Royal Papworth; the double lung transplant. With donor organs in such short supply, there is even more pressure to execute the operation perfectly.

Their patient, 52-year-old ex-plasterer David, is urgently called into hospital when a suitable set of donor lungs become available. David suffers from a genetic disorder called Alpha-1 antitrypsin deficiency, which is destroying the air sacs in his lungs. Tragically, he and his sister Kay have already lost their older brother to the same condition, so they’re acutely aware of how urgently David needs the operation. He has already had to wait four months for a suitable donor – in another four month he’ll be too sick to survive the transplant.

The operation has to be carried out with extreme precision and they’re also up against the clock. As soon as the donor lungs have been cut from their blood supply, they start to deteriorate, so it’s vital that they are transplanted as quickly as possible. Marius comforts David ahead of his double lung transplant

For cardiothoracic surgeon Ravi De Silva there is a fine balance when it comes to his 75-year-old patient Maureen. She feels relatively well even though she has an enlarged aorta; the main vessel for carrying oxygenated blood to the body, but it is in danger of bursting. If it does burst it could be fatal, but the operation to fix it is also extremely high risk. In Ravi’s mind there is a clear choice; the one-off risk of the operation is worth it compared to living with a condition that could be fatal at any time.

The procedure involves replacing the aorta with a synthetic tube and it is so complicated that it needs to be replaced in two parts. First, Ravi must remove and replace the aortic root which comes out of the heart. Then he must replace the next section, the aortic arch, which has branches that provide blood to the brain and arms. But to remove this section, he has to clamp off the blood supply to Maureen’s lower body.  Once that happens, Ravi has just 30 minutes to replace the arc, otherwise the lack of blood to the lower body could result in serious damage to Maureen’s organs and more importantly her spine, causing paralysis.

Ravi completes this part of the operation with just minutes to spare. But when he finally starts to connect the smaller branches of the synthetic aorta to the carotid arteries which lead to her brain, one of them starts to shred. If he can’t get the stitches to hold, it will put the whole operation and Maureen’s life in jeopardy. The official trailer for series three of 'Surgeons: At the Edge of Life'

Consultants involved in the series

Surgeons: At the Edge of Life

Procedures featured in series Working here Surgeons: At the Edge of Life
Back to Our hospital